With the MIDI section you can use external MIDI devices to trigger an instrument in Renoise or vice versa. The MIDI input and output events are listed in the large central panels, where you can also filter the listing of certain events.

MIDI can be used in the Phrase Editor to compose musical phrases that will be activated when specific notes are played. Clicking on the Phrases and Monitor buttons will switch between those two sections. 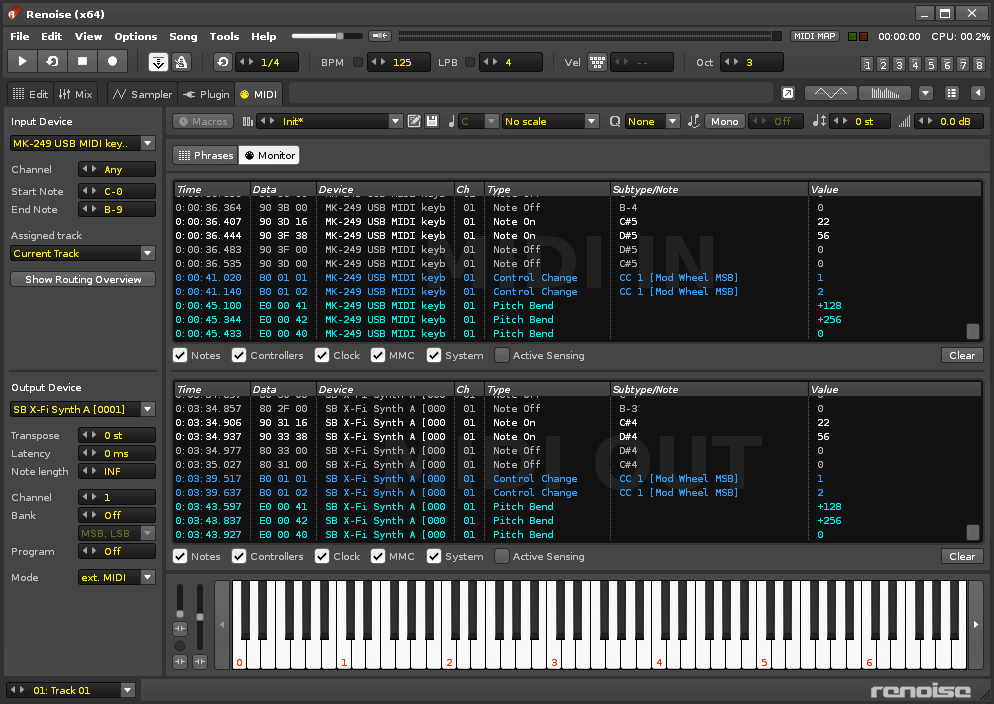 You can assign individual MIDI input devices to an instrument or even several different instruments. You can also specify the MIDI channel and note range that the instrument is activated by, as well as assign it to be played on a particular track within Renoise. These options are particularly useful when performing live. 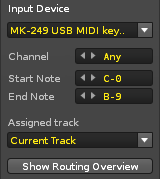 With a MIDI instrument you can play external synthesizer hardware or control software synthesizers running on your computer. The latter is done by using virtual MIDI devices (MIDI Yoke on Windows, the IAC BUS on Mac OSX) and programs which receive MIDI. When running Renoise as a ReWire master, loaded ReWire slaves (e.g. synthesizers like Reason) will also show here as virtual MIDI devices. 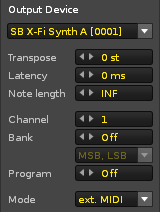 The syncing of external MIDI instruments can become rather complicated and so requires some explanation. There are a number of factors to take into account including the soundcard's audio output latency, the MIDI connection's MIDI latency, the automatic plugin delay compensation (PDC) and the soundcard's audio input latency (if feeding the external audio back into Renoise).

If you're feeding any audio produced by external equipment directly to the speakers, set the instrument's mode to "ext. MIDI". This will delay all MIDI events sent to the instrument by Renoise's internal audio latency (which is composed of the soundcard's output latency plus any PDC). This way it will be sent to the external synth at the same time that the audio generated internally by Renoise reaches the soundcard outputs. If your MIDI interface and external synth introduce no extra delays in handling the MIDI signal, the audio produced by the synth and Renoise should now be perfectly in sync.

In reality however, it is likely that there will be a few milliseconds of MIDI latency between the time that Renoise sends out the MIDI event and the time that the synth's audio output reaches the speakers. To compensate for this extra MIDI latency you can either use the Latency value in the MIDI Output panel or the track delay setting in the Mixer for the track that the MIDI instrument is being triggered from.

If you want to feed the audio from the external equipment back into Renoise for further processing, set the instrument's Mode to "LineIn Ret". Now add a #Line Input device to the same track that you're triggering the external instrument from. In the #Line Input device, set Latency to "MIDI Return Mode". You also need to make sure that PDC is enabled in the Renoise Preferences. Now MIDI events sent to the instrument will not be delayed by the audio latency (as with "ext. MIDI" mode), but instead they are sent out immediately. This is because the audio coming back from the synth into Renoise will be subject to the soundcard's input latency (which is the same as the output latency). So assuming no MIDI latency, the externally produced audio should now be in sync with the internally generated audio.

As with "ext. MIDI" mode, the MIDI connection to the external instrument is likely to introduce some delay here. This time however, you can only compensate for it by using the track delay setting in the Mixer for the track on which you are triggering the MIDI instrument. The MIDI Output Latency value does not allow negative latencies in "LineIn Ret" mode, since in this mode Renoise sends out MIDI events the instant they are encountered. The following diagram illustrates this: 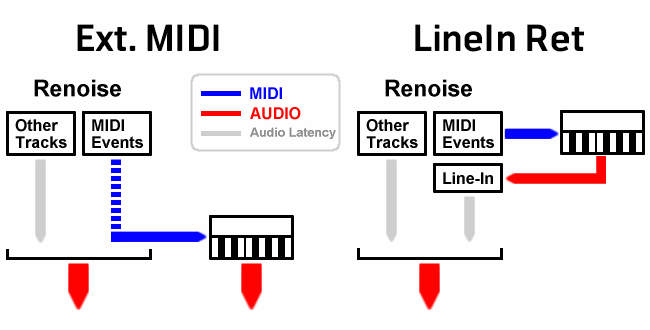 For this routing scheme to work, it's important that you keep the #Line Input device on the same track that you trigger the MIDI instrument from and that PDC is enabled. Without PDC enabled, Renoise will not compensate for audio latencies.

These are the MIDI messages that a Renoise/Redux instrument can understand. Note that in Renoise, the currently selected instrument is the one receiving messages. This can be changed for each song by setting up a specific MIDI input.

Changing the volume, scale key and scale mode will adjust the Instrument Properties for sample-based instruments. If the instrument contains Plugin or MIDI components then the messages will be directed there instead, leaving the samples unaffected.

Messages with a value above 11 have no effect.

Messages with a value above 35 have no effect.