There are two ways of recording notes in Renoise (Redux only uses Step By Step):

To be able to record anything, first make sure that Edit Mode is enabled by pressing the "ESC" key on your keyboard. Alternatively, in Renoise you can click the record button in the Transport Panel, while in Redux there are two options in the Phrase Editor: the Edit button at the bottom left and the 'edit on/off' area at the top right corner of the phrase.

The red border around the Pattern/Phrase Editor indicates that Edit Mode has been activated and inputs will now be recorded at the cursor position:

To record notes step by step, simply play notes with Edit Mode enabled. The note will be inserted into the Note column at the current cursor position and the cursor will move downwards within the editor.

The amount of lines that the cursor moves by can be changed with the Edit Step parameter, which can even be set to zero. In the Renoise Pattern Editor the Edit Step value box is found in the control panel underneath the tracks, while in the Phrase Editor of both Renoise and Redux it's at the bottom-left corner of the phrase. The keyboard shortcut to change the Edit Step value is "Left Ctrl + 1,2,3,4,5,6,7,8,9,0".

A note can be deleted by pressing the "Delete" key when the cursor is over it. Pressing "Backspace" will delete any note or blank space under the cursor, causing all notes and effects in entire track below this point to move up.

You can also record/delete notes step by step while the song/phrase is playing, though when doing this in the Renoise Pattern Editor, ensure that Pattern Follow is disabled to decouple the cursor from the playback position.

The played notes will now be recorded into the track at the current playback position in the Pattern Editor.

When recording notes "live", by default they will be recorded with the highest possible precision using the Note Delay sub-column in the Pattern Editor. The note delay column allows you to delay notes with a precision of 1/256th of a line.

If you do not want to precisely record your notes, you can let Renoise quantize them either in real-time or after recording something. This is done with the quantize controls in the Pattern Editor control bar: 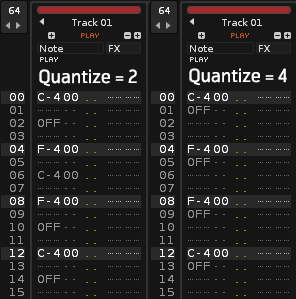 Sequential (monophonic) recording can often be better when recording drums or monophonic instruments. The Mono button allows you to toggle between recording a single note at a time or multiple notes simultaneously (chords). This is located in the Instrument Properties panel, found at the top right of the interface in Redux and near the top right while in the Sampler, Plugin and MIDI tabs of Renoise.

Entering Chords with the Computer Keyboard

When entering notes step by step with the computer keyboard, they will by default be placed sequentially. If you want to quickly insert chords without live recording, you can do this by holding down "Left Shift" while entering the notes. This will automatically create new note columns to the right and enter the new notes there.

Note that MIDI keyboards will always record chords when pressing more than one key at a time.

A ghost note is a note in the Pattern/Phrase Editor that’s had its instrument or sample number removed by the user. When played it will retrigger the most recently played instrument or sample in its column, but with some useful differences from the normal behaviour. This concept and its consequences for playback can be quite technical even for advanced users, so it's strongly recommended that you watch the tutorial video with its demonstrations to gain a firm understanding.

It's incredibly important to wrap your head around exactly what a ghost note will be retriggering, because this can vary depending on the point at which song or phrase playback has begun.

This can actually be from a previous playback of the song or phrase, and for the Pattern Editor this also includes any instrument that has since been manually played by the user with the cursor in the same column as the ghost note.

Although playback of an instrument's samples are restarted for a ghost note, the Modulations are not; they continue uninterrupted. This affects all of the instrument's samples with regard to the Modulation Set that they’ve been assigned. If you’d like this modulation benefit to apply to an instrument that’s using phrases, then you’ll need to create the ghost notes within the phrase itself.

The volume and panning values of the original note are passed on to the ghost notes if they don't specify their own values. When a value is specified though, the changes apply to that individual ghost note only, meaning that the values will revert back to the original form for each consecutive ghost note.

None of this applies to delay values, but the other things that are affected are the I and O effect commands, in both the volume and fx columns, and the J and K commands in the panning column. These will continue fading in or out, or panning left or right without restarting for ghost notes.

Everything mentioned in this section applies to playback within phrases as well, but does not work when ghosting phrases from the Pattern Editor.

While the previous two sections applied to samples only, this one also applies to the Plugin and MIDI components of an instrument.

When an instrument makes use of phrases, ghosting it from the Pattern Editor doesn't restart the phrase playback, but instead it performs the same function as an instant glide. While this is convenient by itself, it's the combination with phrase switching (Zxx) that makes it so powerful. Switching from one phrase to another and continuing from where the previous one left off can normally only be done by inserting that specific line with Sxx. However, using a ghost note will make this process automatic.

When switching to a phrase that uses ghost notes remember that the sample to be triggered in each column will be the last one that ever played there.