The Pattern Sequencer crafts a song's overall progress by defining the order in which the various patterns are played. A song begins with the pattern at very top of the sequence. When this pattern has finished, the next in the sequence is started. This carries on until the final pattern has played and the end of the song is reached. At this point, a song can either loop back to the beginning again or just stop.

The sequencer refers to patterns via their number. Patterns with different numbers hold different content within them, while patterns that share a number contain identical content. When you begin creating a new song there will be only a single empty pattern present: "0".

The pattern which you're currently editing in the Pattern Editor is shown in the Pattern Sequencer with a shaded border around it. On the far left of the interface is the sequence number, which also doubles as a pattern trigger button. At the immediate left and right of the pattern number are two arrows which change its value. You can also double-click on the number and type in a new value with the keyboard.

To the right of the pattern number are a set of buttons. The plus and minus buttons insert and delete patterns. Beneath this is the Clone Pattern button, which inserts a copy of the current pattern into the pattern sequence. At the top is the Section Header button, used to enter text into the sequence to provide descriptions and keep things organised. 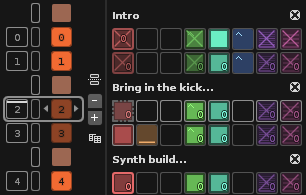 To aid with this, you can also name each pattern. Click and drag the right edge of the Pattern Sequencer over to the right. This will expand it and reveal the name slots. Click on a slot and enter a name with the keyboard, finishing with "Enter". 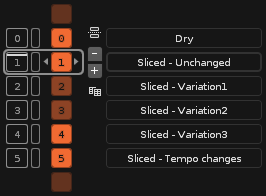 You can detach the playback position from the current edit position, letting you edit a pattern while other patterns are playing. To do this turn off the "Pattern Follow"

option in the Transport Panel. This way you never have to stop the song while editing a separate section.

Patterns can be scheduled for playback via the number/play buttons to the left of the numbers in the Pattern Sequencer. Without stopping playback, you can trigger new sequences in the song in real-time. This lets you freely change the order of playback to sketch out and improvise new ideas.

Using the column to the immediate left of the pattern numbers, you can cause a pattern or sequence of patterns to loop. Left-click and drag in this column to indicate the patterns you want to loop. To remove a loop just click on a single slot twice. Clicking here next to a section header will automatically select all of the patterns in that section.

Clicking on the number slot itself allows you to select it. Likewise, clicking and dragging will select a sequence of patterns. You can also click once and then Shift-click on another pattern to select a range in just two clicks. Clicking the blank slot next to a Section Header will automatically select all of the patterns contained within that section. To remove a selection, just click on any of the empty space in the Pattern Sequencer, such as above/below the buttons or numbers.

Once patterns have been selected, they can then be copied, pasted, moved or cloned (make sure you have released the mouse button after selecting).

Right-clicking on any pattern number will bring up a menu with available shortcuts and yet more operations that can be applied to a selection: 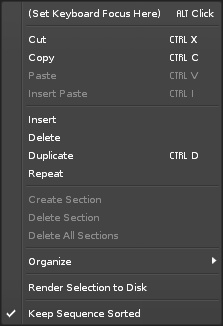 By default, Renoise will automatically organise the sequence so that unique patterns are numbered ascendingly (from 0 upwards). If you'd prefer to disable this, click with the right mouse-button somewhere in the sequencer and untick the "Keep Sequence Sorted" option in the context menu. This option is memorized per song. The menu also offers other sorting options in the "Organize" sub menu.

Sequencer Shortcuts in the Pattern Editor

While editing patterns in the Pattern Editor, you can also quickly navigate and modify the sequence using keyboard shortcuts: