The Pattern Editor is the main editor used to create music in Renoise and is opened with the Edit tab at the top left of the interface. Instruments are recorded by entering notes onto lines in the order that they are to be played, from top to bottom. This is done with the Tracker Interface, so if you're unfamiliar with this method of working, you should read through that section of the manual before continuing here.

A pattern can contain multiple tracks, typically one for each different instrument and each with their own separate set of effects. Songs are created by arranging a sequence of patterns with the Pattern Sequencer and the Pattern Matrix. So, a pattern is normally used to represent a specific section of a song that may be repeated again in future. The length and speed of a pattern can be changed, so the exact nature of a specific pattern can vary wildly depending on the whims of the composer.

You may find it useful to watch a video about the various track types.

There are four different types of track in the Renoise Pattern Editor:

These standard tracks are where you record notes onto the lines of a Note Column. Each track also features Effect Columns, which are used to apply Effect Commands to instruments and to control Track Effects.

Used to group together similar Tracks, such as all percussion, all synths etc. The child tracks have their output automatically routed through the parent track, though you can change this with the Pre Mixer. This means that Track Effects, Automation and Effect Commands used in the Group Track will affect the audio coming from the regular Tracks contained within it. Notes cannot be entered into Group Tracks and so they only feature Master FX columns.

Send Tracks are fed audio from other tracks using Send Devices and are typically used to apply the same set of Track Effects to multiple tracks at once, though there is a whole range of possibilities for creatively complex routing. Notes cannot be entered into Send Tracks and so they only feature Master FX columns.

You may find it useful to watch our video covering the subject of Send Tracks & Devices.

Any track can be renamed by double-clicking on its name and typing in a new one. This is also true for Note Columns.

To add or remove tracks, you can use the "Edit->Insert Track" (Left Control/Command + T) and "Edit->Delete Track" (Left Control/Command + Left Shift + T) commands from the menu in the Upper Status Bar. If the currently selected track is a regular Track, then a new Track will be added to the right of it. If the currently selected track is a Send Track or the Master Track, then another Send Track will be added.

To add a group track, use the "Edit->Insert Group" (Left Control/Command + G) command or drag one track onto another while holding down Alt. This will create a new group and add both tracks to it.

To reposition a track left-click and hold the button on its name, then drag the track to either side. This can be done in both the Pattern Editor and the Mixer. You can also move tracks by using the Ctrl/Command + Alt + Left/Right shortcuts.

To duplicate tracks, you can use the "Edit->Duplicate Track" (Left Control/Command + D) command from the menu in the Upper Status Bar.

To collapse a track, press the small arrow to the left of the track's name. This just hides most of its information; the track will still play as normal. You can collapse a Group of tracks in the same way and also collapse the Group's Master FX column using the arrow to the right of its name.

Using Single Track Edit Mode will cause all of the tracks and groups to collapse, except for the track that the cursor is currently in. Moving the cursor to other tracks while in this mode will automatically expand those tracks and collapse the one you were previously in.

To change the color of a track, left-click on the color slot above the track name. Using the color picker you can move around the grid to choose a color, while the left-hand slider controls the saturation value. You can also pick colors from the available swatches or right click on a swatch to save the current color to it. The "Background Blend" slider controls the amount of color present in the track's background. Enabling "Apply to all tracks" will apply the slider value to all of the tracks at once. 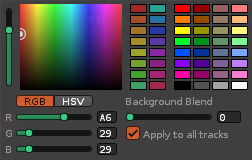 At the bottom of the Pattern Editor is the control panel: