The Mixer is opened with the Mix tab at the top left of the interface.

If you are familiar with hardware mixer consoles, the Mixer in Renoise will look familiar to you. It provides a quick overview of all available tracks, Track Effects and output levels. This is especially useful in the last production stage, when you are finished with the main song structure and need to concentrate on polishing the final mix. The Mixer also allows you to display a subset of track effect parameters which you can customise. Using this, you can prepare your songs for live performance by showing only the parameters you would like to concentrate on adjusting. 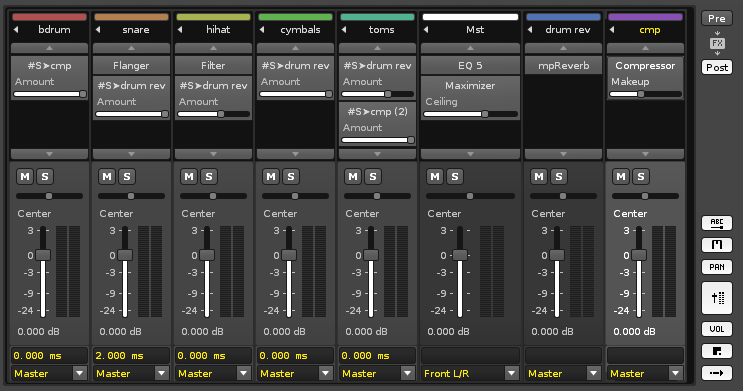 Detach button, which opens the Mixer in a completely separate window that can be moved around and resized. There are also additional buttons at the window's top right corner for minimizing, maximizing and closing. Clicking

Attach will reattach the window to the main interface.

Note that the Spectrum and Track Effects panels and buttons are moved to the Mixer window when it’s detached.

Volume and panning controls in the Mixer can be set up to show two different levels:

The idea behind the Pre/Post mix separation is that you should use the Pre levels while composing the song. Automation, like the fade-in of tracks, should be applied here or with a Gainer Device. Post volume and panning levels cannot be automated and should only be used in the final mixing stage to balance the mix.

At the right side of the Mixer you will notice a set of buttons that allow you to show/hide to some of the components:

Track colours can be shown or hidden in the Mixer as well. Right-click anywhere in the Mixer effect chain section and select, "Show Track Colors".

Working with Effects and Chains

Track Effects devices are shown in the Mixer rack above the track levels. Right-clicking an effect brings up a set of options for both that specific effect and the whole chain. To show/hide particular effect parameters, right-click on the effect and choose them from the "Show Sliders" menu option. 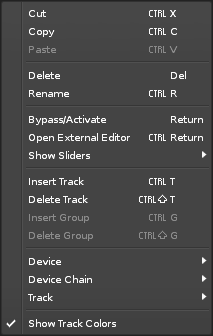 To route a track into a Send Track, a #Send device is inserted into the original track. For a full explanation of how this works, see #Send device in the Routing Devices section of the manual. In the Mixer, the #Send device's slider controls the amount of audio that is sent to the send track.

To visualize this in the mixer, track levels which do not reach the Post volume and panning are shown by a different colour (white by default instead of green, but this may vary depending on the current interface Theme): 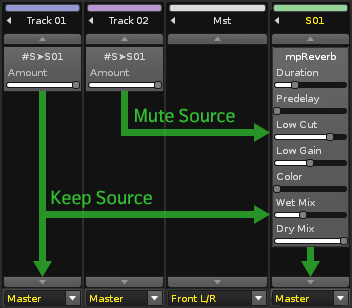 (Send Device Routing in the Mixer)

To disable or change the scaling for all meters, right-click on any level meter in the mixer and choose from the list. This also works for the master level meter at the top of the Renoise interface.

Controlling the Mixer with a MIDI Controller

You can attach MIDI controllers to the Pre/Post volume and mute/solo controls, allowing you to comfortably mix a song using the controller. To do so, select "View -> Midi Mapping…" from the main menu or click on the "MIDI Map" button at the top of the Renoise interface, next to the main VU meter.

Have a look at the MIDI Mapping section of the manual for a more detailed description of the available features.

Drag and Drop, Copy and Paste

Note: Copying or moving an effect from one track to another will not move device's Automation(s) as well. When moving a device, the original Automation(s) will be removed.