Audio devices enable your computer to create the sounds you hear, either through a dedicated sound-card or simply using your computer's built-in hardware. Regardless of whatever generates the actual sound output, what you control in Renoise is the audio driver, which is what allows the hardware and software to communicate.

By default, Renoise is configured to use the system's default audio output device at a high latency, ensuring that in most cases Renoise is ready to go and output can be heard. No input device (something you can record with) is selected by default. Because the default settings are often not optimal for your particular machine, you should have a quick look at the Audio Preferences in case adjustments can be made.

To change the audio settings in Renoise, select "Edit->Preferences" from the Upper Status Bar. On MacOS you will find the "Preferences" in the "Renoise" menu at the very left.

In the Preferences menu, select the Audio tab: 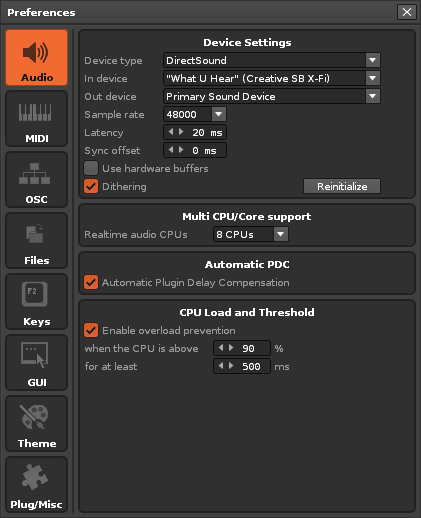 (Example of the Audio Preferences tab on Windows)

What follows is a quick overview of how to set up devices. For a more detailed explanation of the Audio Preferences, take a look at the Preferences section of the manual.

On Windows you will have the choice between two different audio architectures:

Because of its many advantages, using ASIO is highly recommended. Even if your sound-card does not provide ASIO drivers (i.e. your device does not show up in the ASIO device list in Renoise), you could try out a free general ASIO driver for Windows: ASIO4All. This driver will work with most audio hardware, but may not be as reliable as your specific sound-card vendor's official drivers.

On MacOS there is only one driver architecture present and it will work out of the box on all available Macs. Named 'Core Audio', it is similar to ASIO, offering low latencies and allowing the use of multiple sound-card outputs (when present) in Renoise.

On Linux you have the choice between two different architectures:

Configuring Linux for Audio in general: Many Linux distributions are, by default, not optimized to the standards required for real-time audio creation in Renoise. So when using either ALSA or JACK with Renoise it is recommended to:

Both topics are described in depth in our Linux FAQ. For more information on the subject, this general Linux and Audio FAQ is also recommended: linuxaudio.org

Latency is the time it takes for the Renoise output audio to be played on your speakers or headphones. The lower the latency, the quicker Renoise will respond to what you play or modify. So lower latencies are preferable, but they also require more CPU power to maintain. If the CPU becomes overloaded then the audio will start to crackle and choke. If you hear such crackles in the sound output, the first thing you should do is increase the latency via the Preferences menu.

The sample rate defines how much detail is contained within the sound that you hear. The higher the sample rate, the more detail. 44,100 Hz is the rate that is used by CD players, so that rate offers an excellent playback quality. Whether higher rates result in a noticeably better listening experience is debatable, but they do offer increased resolution for effects. Rates below 44,100 Hz are not recommended because there is an audible reduction in sound quality.