Redux Note: Full Editor mode is the Redux equivalent of the Renoise Sampler.

Renoise has a strong focus on samples (a singular focus in Redux, since it only uses samples) and at the heart of this is a powerful built-in Sampler for creating and sculpting sounds. An instrument may contain any number of samples and these are listed in the Sample List section at the left side of the interface.

New sounds can be recorded directly into the Sampler from external sources, or created by hand with the simple Draw tool. Existing samples can be imported and any changes made are exclusive to each individual song or instrument. The source samples are never modified unless you explicitly overwrite the file by saving it in the Disk Browser. Besides being non-destructive, the Sampler also supports endless undo/redo-ing of all your actions. 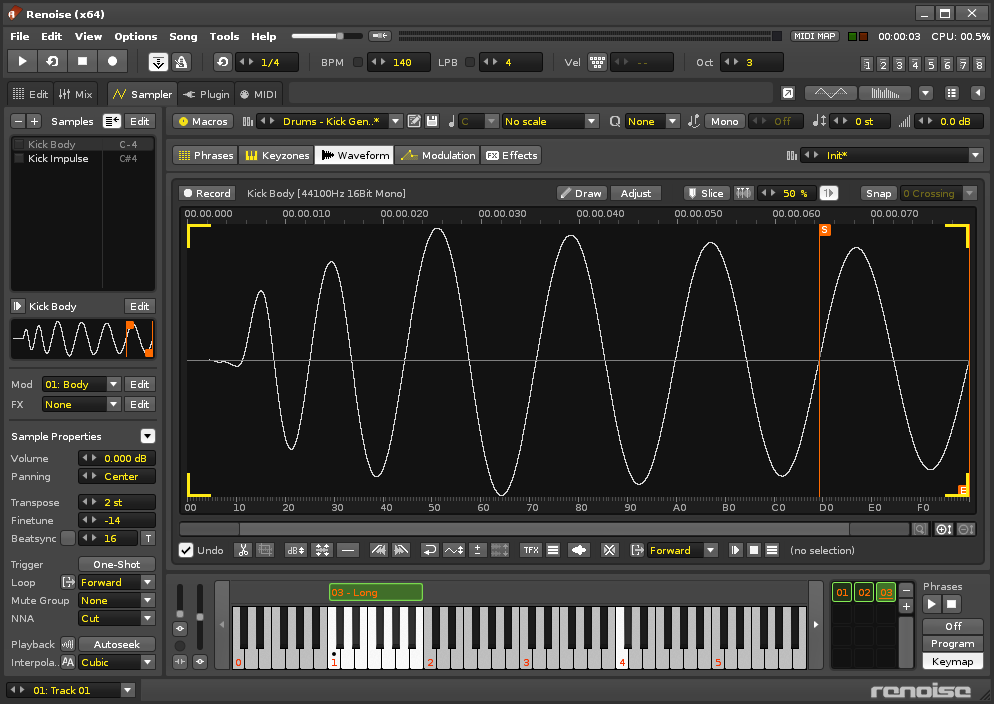 The Sampler is split into five different sections, each devoted to a different aspect of sample-based instrument construction:

Specific preset types for each of these sections are available from a drop-down menu at the top right corner, where you can load, save, import and export.

Located at the left, this section provides a list of the instrument's samples and is always accessible, no matter what central section you're working with, allowing you to switch between different samples whenever you wish. To select a sample, left-click on it in the list. This will also show the sample's name, waveform and assigned Modulation/FX sets at the bottom. When a sample is playing, the playback indicator to the left of its name will light up.

Left-click on a sample to select it. Now if you hold down "Left Shift" and left-click on another sample, both samples and any between them in the list will become selected. Holding "Left Ctrl" ("Command" on Mac) and left-clicking on samples will select/deselect them individually, allowing you to pick any combination from the list. When multiple samples are selected any changes made to the Sample Properties will affect them all.

Samples can be triggered for either Note-On (key press) or Note-Off (key release) inputs. To move a sample to the Note-Off Keyzone layer, right-click on its name in the Sample List and select "Move to 'Note-Off Layer'". Use the same method to move samples back to the Note-On layer. When there are samples using the Note-Off layer, tabs will appear at the top of the Sample List allowing you to switch between the layers and view the samples contained within. 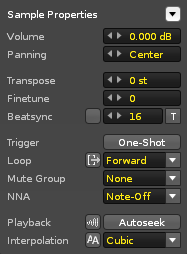 Macros allow for powerful handling and automation of an instrument's Modulation and Effects parameters. In Renoise this is controlled with the *Instr. Macros track effect, while Redux uses the options available within its host DAW.

You may find it useful to watch our video on this subject. 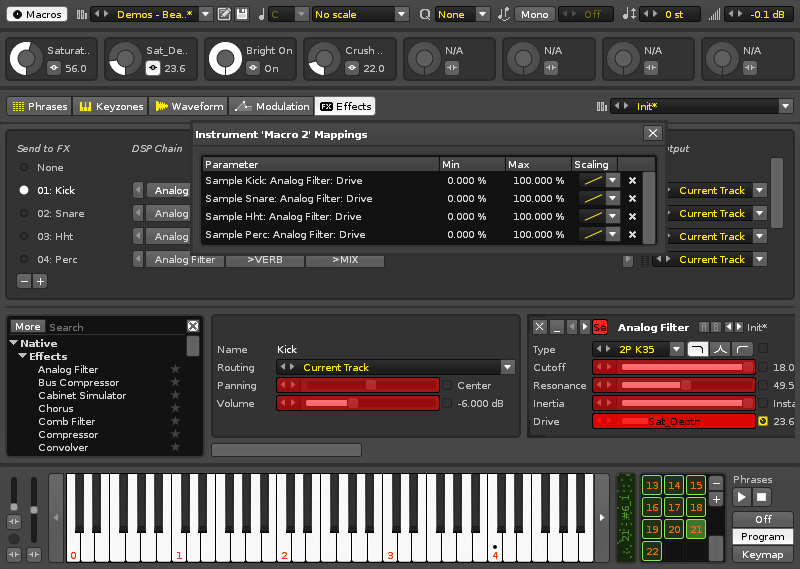 button at the top left of the interface will open a panel with eight macros, each of which can be assigned to multiple parameters. To map a macro, press the

button next to it. This opens the mappings list and highlights any mappable parameters (shown here as red, but the highlighted colour may vary according to the current interface Theme). Clicking on a parameter will add it to the list and allow you to specify its Min/Max values and Scaling. Now altering the value of a macro will change the values of all assigned parameters.

Clicking the X at the right of a mapping will delete it. Closing the mappings list removes the parameter highlighting and returns the interface to normal again. To rename a macro, just click on its name and type one in, finishing with Enter.

Found just to the left of the on-screen keyboard and representing pitch-bend, a mod-wheel and channel pressure, the MIDI controllers can also be mapped as macros.

Renoise only: Macros are also available in the Instrument Properties section under the Instrument Selector, giving you easy access to them while using the Pattern Editor or Mixer.