Rendering your song to an audio file is usually the last step to take when you've finished creating your music, but it can also be use to export sections of a song, perhaps to be reused in another composition, or even for post-processing in other multi-track editors by rendering each track to a separate file. Renoise does not directly render .mp3 files, only uncompressed .wav files. However, those .wav files can then be easily converted to .mp3 with free external applications.

You can also quickly render, resample and reuse parts of the song from within the Pattern Editor.

You can open the Render dialog by either clicking the "Render" button in the Disk Browser with the "Song" category selected, or by using the main menu option: "File -> Render Song To Disk...". 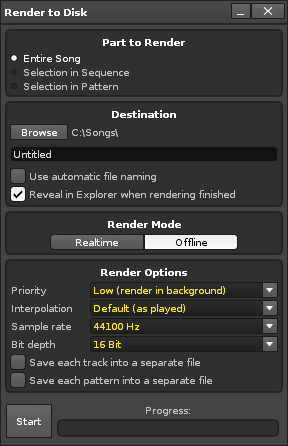 This specifies which part of the song you want to render. Note that muted tracks and columns are never rendered by Renoise, making it easy to exclude tracks/columns you don't want to export.

This determines where the .wav file will be saved and under which name. Hitting the "Browse" button will prompt you to select the folder where you would like the rendered files to be saved. Enter the name of the file in the text field under the "Browse" button. The destination file(s) will always be standard .wav audio files.

Rendering Offline is faster, more accurate and allows more options. Rendering in real-time will simply play the song and record the output, which also allows the recording of Line-In Devices and MIDI instruments that play in real-time. Some plug-in instruments and effects may render incorrectly when running faster than real-time, so use this mode for those occasions.

Quickly Rendering Parts Of A Song

It's also possible to render only small parts of a song from within the Pattern Editor, perhaps for generating new samples or to grab sections which require a lot of CPU power when played normally. To do this, select one or more lines in the Pattern Editor, then right click (on the Pattern Editor) and select "Render To Sample" from the context menu. Alternatively, you can use the shortcut "Left Control/Command + Alt + Shift + R". The newly created sample will be loaded into the next free instrument slot.

If you want to create sample-based instruments from plugin instruments, you can use a dedicated function in Renoise to do so. See Render or Freeze Plugin Instruments to Samples for more information.